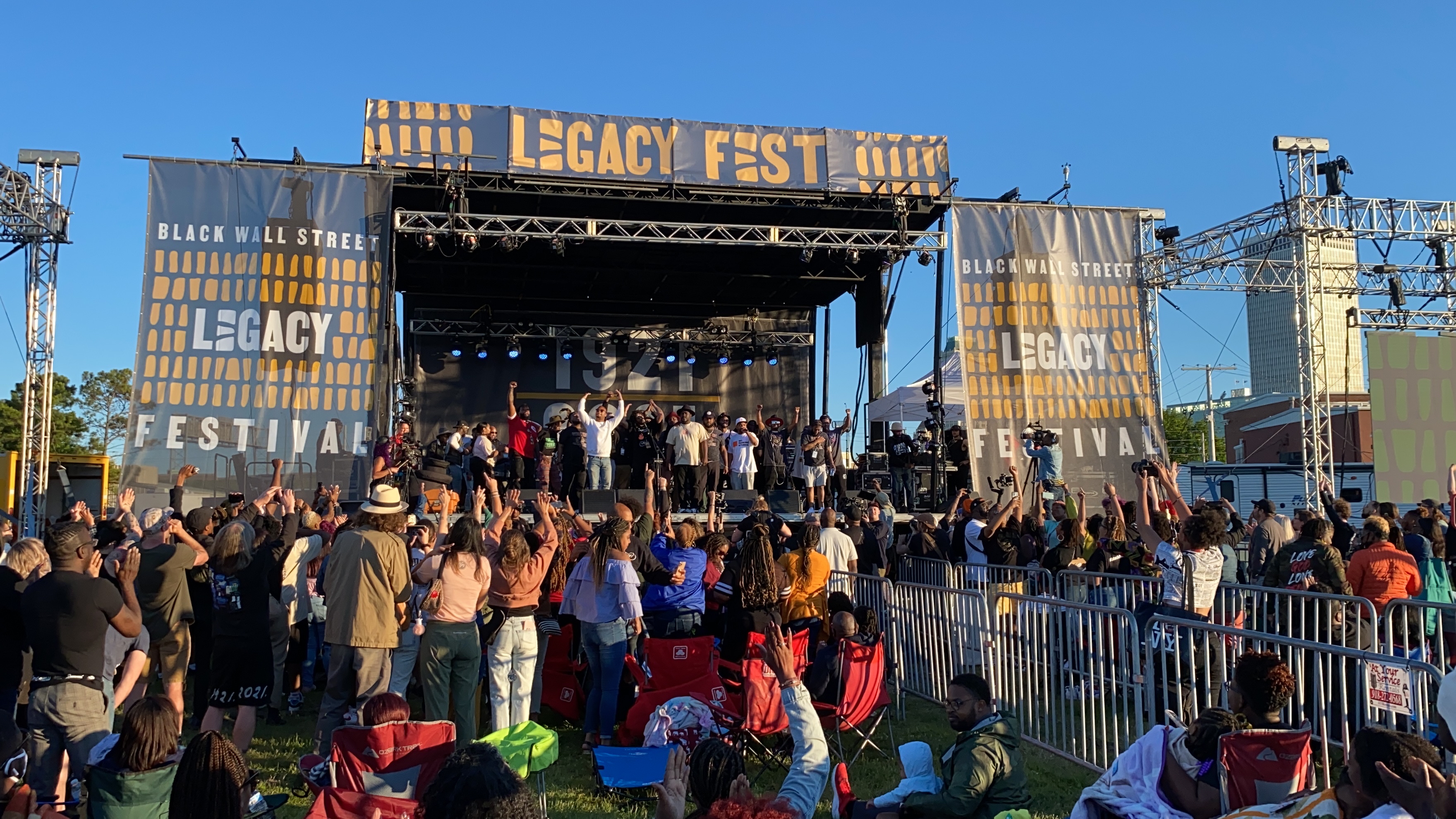 Gathering on hallowed ground of Greenwood exactly one hundred years to the day from the events the album narrates, “Fire in Little Africa” premiered live for Tulsans at the Black Wall Street Legacy Festival Saturday night.

When the spirited performance ended and the collective of more than sixty Oklahoma rappers and musicians gathered on stage, Steph Simon spoke for the group, urging thousands of mostly Black and hundreds of White, Indigenous, Asian, and Hispanic to “look around you” at a new fiery spirit in North Tulsa. He said in this crowd are new business owners and future business owners.

“Fire in Little Africa” (FILA) opens in an Elevator and a dream, as Hakeem Eli’Juwon and Steph Simon establish Dick Rowland as a narrator’s voice that spans one hundred years, identifying with the young man whose fabricated offense was used as a pretext for a pogrom of Greenwood by Tulsa city and county deputized and heavily armed white mobs in 1921.

In the second track, still with “Diamond Dick” in and out of the Drexel Building, now waking from a bad dream, just to live in a nightmare of reality, coming to grips with Sarah Page turning on her lover. It is believed and documented that Page and Rowland had a relationship and left Tulsa.

Shining features Steph Simon, Dialtone, Ayilla, and Jerica and is already a big hit with the most plays from the album on Spotify. The Youtube video is embedded, and a review has been published by Rolling Stone.

Imagining a life in a 1920s club, with horns and rolling bass vibe, 300 deaths, I guess that’s how the story goes, Jane Doe, Jane Doe, killing us softly, Greenwood, red man’s land made successful by Black men and women, build it back Black, “got audacity to walk out these ashes and shine.” As the song fades we hear a young Black boy shouting to Greenwood elders, “Eh, they got Dicky Rowland.”

The cover of the album reminds me of the cover of Kendrick Lamar’s To Pimp a Butterfly, a flip of white supremacy places of power. Pictured in front of the mansion once owned by former klan member Tate Brady, who in the aftermath of the massacre continued to press for segregation and stealing Greenwood land. Brady’s name was removed from the Convention Center where Black detainees were held as a concentration camp in the days after the massacre.

The mansion, now called “Skyline Mansion” and owned by NFL first-round draft pick and Tulsan Felix Jones, was transformed in another way, to be recording studio for the album. Greenwood Cultural Center was another studio for five days of recording for the album in March 2020.

Sterling Matthews, Am’re Ford, Parris Chariz, and M.C. ministered healing in the live performance of “Drowning,” Matthews asking the throng of thousands gathered behind AME Church, the only structure on Greenwood Avenue standing today that existed during massacre, “Have you ever felt like you were drowning in pain?” Piano and violin. “So much pain inside of me, I just want you to be proud of me.”

Matthews and Ford lifted up the pain inside and invited souls living and listening tonight and those souls lost in the massacre, to walk with them, “my spirit from Greenwood to Pine and back, like the grit of Black love, then and now.”

Evidence from white-owned newspapers and white church sermons from 1921 without a doubt point to use of the designation “Little Africa” as racist insult. Upending the insult and starting a different kind of fire this time, the much anticipated hip hop collaboration album by Oklahoma rappers, poets, musicians, visual artists, singers, and producers commemorates the centennial the 1921 Tulsa Race Massacre.

Turning the tables on white supremacist literal fire, bullets, and bombs, FILA soars above Greenwood, in and out of dreams, lifting and drowning, turning pride and pain inside out and outside in, rising high above the elevator, higher than those WWI planes flying over Greenwood, more explosive than dynamite that blew down brick and mortar but could never destroy the Spirit of Black Wall Street.

The Motown Records/Black Forum album is presented in partnership with The Woody Guthrie Center and Bob Dylan Center and includes an album, podcast, and documentary in collaboration with the 1921 Tulsa Race Massacre Centennial Commission.

FILA artists are all pursuing their art in their own ways. I met “Fire in Little Africa” (FILA) member Damion Shade through work with ACTION Tulsa and Damion’s work at OK Policy Institute in our mutual desire to see criminal justice reform in Oklahoma. Shade is one of the best musicians and producers in Tulsa.

I met Jacobi Ryan at Black Wall Street Liquid Lounge the day after the show. Ryan is kind, approachable, and helpful in input for this review.

Ryan raps with K.O. on Top Down. K.O. is a rapper with her own music videos. As she raps in Top Down, “I gave this plan I had to God, He supersede it. I told him I’m the Illest b**** alive and I believe it. I’m out here ownin’ like I own it dedicating my whole life to everything I ever wanted. It ain’t too much to come with them degrees and them diplomas. S***, I ain’t have a way, I had to make a way. Now all I do is work and pray for better days. I never fade because I put my heart in the art of it. Being as real as I am just like the start of it, holy matrimony I’ll vow to never depart from it. I really do, I’m busy working my moves, I move from telling you lies so I can bless you with truth, I know.”

I was happy to meet K.O. after the show. No, I didn’t have a backstage pass. She was passing out her K.O. (sheisko) business cards in the parking lot. When she approached my car, I thanked her and the group for a phenomenal and inspirational performance. I told her I truly believe FILA has a shot at a Grammy. She did not disagree.